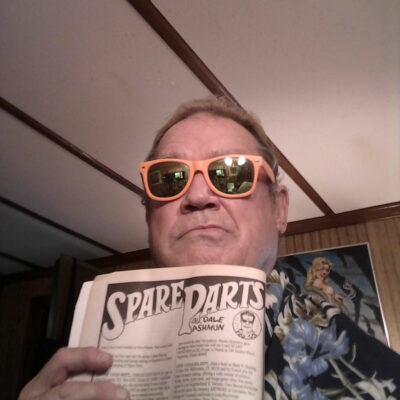 I’ll be playing a wide variety of music from reggae to rock, Broadway to blues and classic bits by stand-up comedians like the late, great Norm Mac Donald, Doug Stanhope, Brian Regan, David Cross and many more. I’ve spent the last 40 years selling articles to magazines like SCREW, High Times, Hustler, Penthouse Forum, Oui, STOP!, the Village Voice, Psychotronic Video, OFF BEAT (from New Orleans) and Roadkill to name a few. It was in STOP! that I created a column called SPARE PARTS in which I plugged a humongous variety of goodies that were sent to the magazine for review purposes. Thus the program’s name. I’ll also be sharing taped highlights of interviews I conducted with such low brow luminaries as Robert Crumb, Russ Meyer, S. Clay Wilson, Peter Bagge, John Holmstrom, Robert Williams, Bill Griffith, Kenneth Anger, Mark Mothersbaugh and many more talented artists, musicians and filmmakers. I also plan to feature live music by some of Hot Springs most talented musicians and special guest DJs via phone or live in the studio. Please tune in, and I will take your song requests… but no songs with swears in the lyrics!